Today for any government it is important that it understands that the expectation from the government is to act as a facilitator and provides the necessary resources to the people so that they can achieve their goals and take their state and country forward on the path of progress and development.

Veteran leader Venod Sharma has formed Jan Chetna Party with a motto of jan jan ko jagana hai, jan chetna ko failana hai (it is time for mass awakening, it is time to spread awareness). Haryana Jan Chetna Party is not just a party; it is a fructification of a movement. It is a coming together of likeminded parties who has come together on a platform to take the state of Haryana forward.

Haryana Janchetna party, if come to power will set in motion the process of development and growth in Haryana. The party will provide a road map for the development of Haryana. It will make Haryana the number one state of India.

With an aim to provide clean and capable leadership, Haryana Janchetna party is a movement that is rapidly gaining momentum. It is the charm of Venod Sharma that youths are joining the ranks of party in large numbers. For youth Venod Sharma is their only hope in Haryana, someone whom they look up to.

Announcing manifesto Venod Sharma attacked on rampant corruption and said that it has become the reality of today’s Haryana. Anger against corruption is on roads and people of Haryana are fed up with system where nothing happens without greasing palms of the officials.

Haryana Janchetna Party manifesto has highlighted almost all aspects which includes social-economical, political problems. System had been corrupted to the extent that ordinary citizen could not get his work done without greasing the palms of the officials. 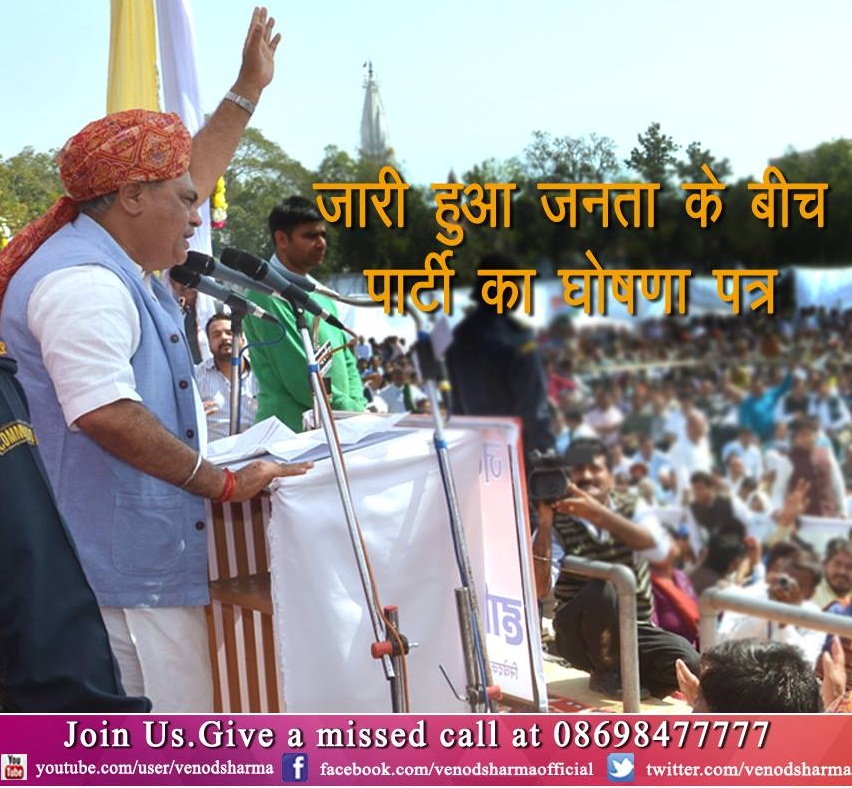 Strongly demanded that the State Subordinate Services Commission should be disbanded and merit should be the sole criteria for the recruitment process. All communities in Haryana to get equal job opportunities are the main features of the manifesto.

Besides that no toll plaza, transparent system for issuing of change of land use (CLU) certificates and focus on e-governance, student body election every year, mandatory provision of birth and death certificates without prior application, free technical and computer courses for the youth of Haryana, bring FDI and promote domestic private sector etc are other major features of Haryana Janchetna Party’s Manifesto.

Keeping in mind the citizen’s of Haryana Janchetna Party has covered almost everything and added it in the manifesto to provide relief to the people of Haryana. Venod Sharma has announced people centric manifesto.